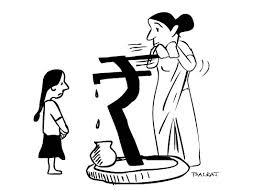 Delhi government is held bent on Privatization on Water. Earlier it had floated four tenders for amounting to Rs approx. 1100 crores for namely four areas Nangloi (Rs 788 cr), Malviya nagar (Rs 172 cr), Vasant vihar (Rs 142 cr), Mehrauli (Rs 69 cr). These tenders floated for improvement and reverifying of existing water supply, transmission and Distribution of existing network to improve deficiency of water distribution network. To meet these expenses DJB enhanced its budget to Rs 3800 cr in which about Rs 1800 cr is for unplanned expenditure. Over the past years the budget housing around Rs 1400 cr to Rs 1700 cr. The privatization game plan of DJB is clear case of large scale loot of public money in the name of PPP model. The whole structure involves their transferring of the existing infrastructure to private sector without any cost them and further paying them Rs 1100 cr for enhancements for improving the efficiency of existing network.

This is being paid for about Rs 1lac connections which comes to cost or Rs 1,10,000 per connection. In addition the operate contractor is being offered for Rs 4.15 per k/lt as operation charges with DJB bearing all cost of electicity Distribution losses and NRW, while DJB is presently recovering only Rs 2.2 per k/lt. the crucks of the game is the private contractor is getting the existing good infrastructure and Rs 1100 cr for its repair and maintainance and assured operation charges to syphon of hafty profits.

Premises of which privatisation argument of DJB is based on that there is a large scale leakages in the existing network has part of Non Revenue Water. Secondly there is an overall shortage of water. Thirdly the condition of pipeline used in distribution channels requires large scale repairs. All these three premises are based on the report of JICA in the year 2010-11 which has based his report mostly on the World Bank in the year 2012. JICA and World Bank claim large scale NRW to the tune of 66% out of which they say that the leakages are the tune of 4o %. These are reports are based on sample survey. World bank had only did a pilot study of 1039 connections covering a length of 44 km pipe whereas JICA studied 3140 connections covering 4.7 km.both of them mention in their report that actual leakages found were vary negligible and pipe condition to be good. If we see the report of DJB is LD& I division which has many equipment for detecting underground leakages in its report says after surveying complete DJB network that the leakages are to the tune of only 0.00015%. Further the report says that if there is any underground leakage it will be visible as water flows upto the surface due to hire density of earth below.

The second premises of large scale shortage also doesnot stand the test of the scrutiny because recently Delhi government claim that it is releasing 8.30 MGD of water and Delhi requires about 1050 MGD. This requirement is also based on JICA report which assumes that indivitual require to 274.4 LPCD per person and multiplied by about 18 million population comes to 1084 but LDI’s report mentions that indivitual require only 150 LPCD based on the figure given by the planning commission which comes to only 480 MGD. The large scale discrepancy in requirement and availability that we see is specifically with reference to unauthorised colonies where requirement is 31 as per LD & I but supplies is only 4.3 MGD similarly JJ colony figure show a requirement of 34 MGD whereas the supply is only 16 MGD. The LDI report points out that the water release figure of 830 MGD is highly inflated and actual supply to Delhi is of only 498 MGD and the claim of 40% leakages is not justified which comes to about 332 MGD. Expert say that in delhi if daily 332 MGD leakages were lacking place then there would have been large scale flooding of most of the areas.

The third premises of Bad conditions of pipeline use in distribution channel also doesnot hold ground as the 13 WTP in Delhi has Chandrawal 1 age as 78 yrs and Sonia vihar as only 10 yrs. JICA claims the life to be only 50 yrs but MOUD in its report says that CI pipelines in various part of the country have been found in giving satisfactory services even after 100 yrs of use. Therefore there is sufficient life span left, plus LD&I survey shows the conditions. These pipe has good. So we can conclude that all the whole premise on which privatization argument is based is false

• Own report of DJB LD&I’s report dated 14/5/12 says only 0.00015% leakages.
• It says that there is sufficient life span left for the pipe lines.
• DJB is already taking care of NRW is following manners with claim to bring NRW below 10%.
a) Since there is negligible losses in the area hence the real increase of wate supply through pipe replacement is not possible.
b) Water meters are already being installed by DJB through contractor with 5 years maintenance.
c) Billing system has already been handed over to Tata Consultancy Services to rectify unauthorized connections.
Therefore we can conclude that the whole privatisation process is to benefit are prepared in the interest of syndicate of corruption contractors will not benefit the common citizen.